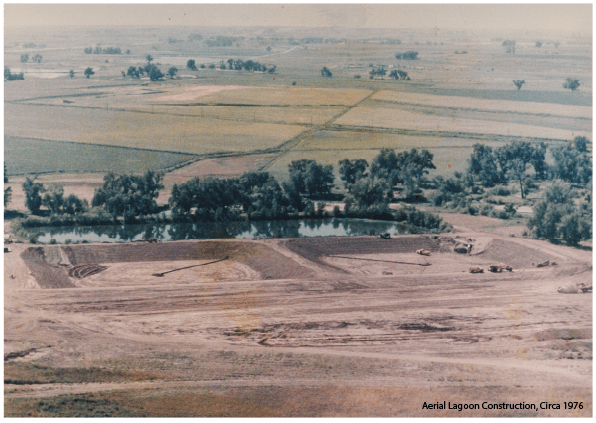 The history of Boxelder Sanitation District

The concept of “The American West” is something that’s mythologized not just in the United States, but all over the world. Manifest Destiny. The Wild West. People enjoying the beauty from “sea to shining sea,” as it goes. But while western expansion tamed the wild landscape via laid infrastructure like trails then railroad, and soon highways, another type of infrastructure was just as essential to bringing modern populations across the plains: water and sanitation.

Like the Europeans discovered centuries ago, densely populated societies create waste, and if that waste isn’t disposed of properly, society can fall apart very quickly. For an area like Northern Colorado, which has transformed from a once-important trading hub to a highly-populated area of modern commerce, sanitary sewer service is one of the pillars that has supported its growth.

For more than 50 years, Boxelder Sanitation District has acted as a reliable utility to ensure residents of this important area can enjoy clean living in their homes and places of business, while also enjoying clean recreation in the natural areas they love so much.

The history of Boxelder Sanitation District

With news reports that Colorado’s population is on track to grow by roughly 2 million people through 2050, it can be hard for new residents in the area to imagine what life must have been like back in the mid-20th century. Quieter in comparison. Maybe a bit slower and simpler if looking through the lens of nostalgic hindsight. But with a population that was quietly ramping up, sewer service was a hot topic for those in the know. That’s why, in the midst of growth, Boxelder Sanitation was formed.

Officially formed in 1965, the Boxelder Sanitation District was created as a Special District under Title 32 of the Colorado Revised Statutes. For the unfamiliar, other special districts also formed by this legislation included fire protection districts, water, health and parks and recreation services—all essential services for the current and future health of area residents.

The District was created by a group of forward-thinking, visionary property owners. These owners saw a need for sanitary sewer services in-and-around the intersection of I-25 and East Mulberry Street, and perhaps understood that the lack of plans to service this area not only caused issues for them at the time but also throttled any progress for future growth.

When the Boxelder Sanitation District was officially formed in 1965, it included less than 100 accounts.

The importance of sewer services

Before we jump from 100 accounts in the mid-1960s to Boxelder’s growth (which parallels the area’s growth) let’s take a moment to examine why sanitation and sewer services are so vital.

For anyone who has read up on the history of civilization, played the video game The Sims, or used a toilet, it’s clear that wastewater management and sewer systems are crucial elements to overall sanitation and disease prevention. Here in Northern Colorado, we’re not only gifted with tremendous open natural areas and pristine wildlife beauty, but also incredible water, whether in the stream or tap. Without a proper wastewater treatment system like the one managed by Boxelder, our environment and water supply would quickly become contaminated and spread disease throughout our population.

With the creation of Boxelder Sanitation District in the 1960s, those original 100 accounts became the cornerstone for ensuring this area would have proper wastewater management and clean water for generations to come.

The growth of Boxelder and the region

Since the formation of the District in 1965, the population of Northern Colorado has grown at breakneck speed. In 1960, Larimer County had roughly 54,000 residents. According to the most recent annual population estimate from the American Community Survey in 2019, that population clocked in at a whopping 356,899. That type of growth is indicative of the pace of growth Boxelder Sanitation District has experienced, which covers portions of Fort Collins, Windsor, Severance, Timnath and unincorporated areas of Larimer and Weld counties.

The extension of collection lines and treatment plant upgrades required for new development are paid for by developers seeking services under the District’s philosophy that growth pays its way. By operating this way, current Boxelder customers can rest easy knowing that the District keeps them as the number one priority—well, at least tied for number one next to clean wastewater.

As forward-thinking as the original founders of the District were, they couldn’t have imagined how important to the county, and densely populated, this area would one day become. Today, the District maintains 100 miles of sewer lines and treats approximately 1,940,000 gallons of wastewater each day (that’s 700 million gallons a year). The reason why so much water is processed by Boxelder is because each household in the District uses roughly 100 gallons of water per day—that’s a lot of water. Businesses and commercial sites, like our beloved breweries, use even more. In an area where water is such an important and limited commodity, it’s essential that services like Boxelder tend to the treatment of our used water before it’s returned to Boxelder Creek and the Poudre River.

That commitment to the health of residents and the environment has not gone unnoticed. The Boxelder treatment plant has been recognized by the Environmental Protection Agency (EPA) for its ability to treat wastewater. Learn more about that process over at our wastewater treatment page.

Clean water for years to come

Wastewater treatment is often considered a silent, yet essential, service for a happy, healthy life and we like to keep it that way. Boxelder customers shouldn’t have to think too hard about their wastewater—with the exception of much-needed and appreciated water conservation practices—because we’re here to make sure wastewater is properly cleaned in order to help maintain our fragile ecosystem. From the 1960s to the 2020s, that mission remains the same—though slightly bigger in scope today.